Aside from my “releasing ropes” obsession, how about a funny story.

So my first job was working as a lifeguard during the summer season (which was about a good four to five months). Southern California is hot especially during the summer. Now, when I said I was a lifeguard, I do not mean lifeguard like the stereo typically gorgeous looking lifeguards that monitor the beach in slow motion like the Baywatch classics. Not even close. I was more of a “lifeguard”, you know, the kind that has to make sure that people don’t drown in 3ft of water because they forget to stand up (and if they do begin to “drown”, I basically blow my whistle, jump into the water to literally show them where the ground is and stand them up). I worked in a water park and landing into a pool after a super twisty water slide apparently made 3ft of water quite dangerous.

Raging Waters is the name of the park. I was there for two summers in a row for the 2013 and 2014 seasons. After my last season, I was done. Yes, the job was tons of fun and super refreshing during those hot days, but I was ready to move on to something else where headaches would be less frequent and my hair didn’t stink of chlorine and sunblock all the time.

This story takes place on a particular day in the summer of 2014 where I was working on a fun rotation for a ride called Thunder Rapids. *dun dun duuuuunn* (on the map, it is one of the rides on the very bottom next to the Amazon Adventure.) Now, everyone loved to work the Thunder Rapid’s rotation because it normally consisted of 2-3 lifeguards at a time due to there being two lines and two ways to enter the slide. Usually each line was taken care of by one of the lifeguards while the third lifeguard made sure to pass on the rafts that came up the conveyor belt. It was allowed for us to splash the guests with water if they splashed us first. The guests didn’t always splash us, however, when it was two lifeguards working the lines and loading up the guests onto rafts, the lifeguards usually ended up having a splash war with each other. This often resulted in the guests being included in the splash wars making that rotation at the top of the slide incredibly fun to work on during the hotter days.

Now, let me explain how this ride goes. 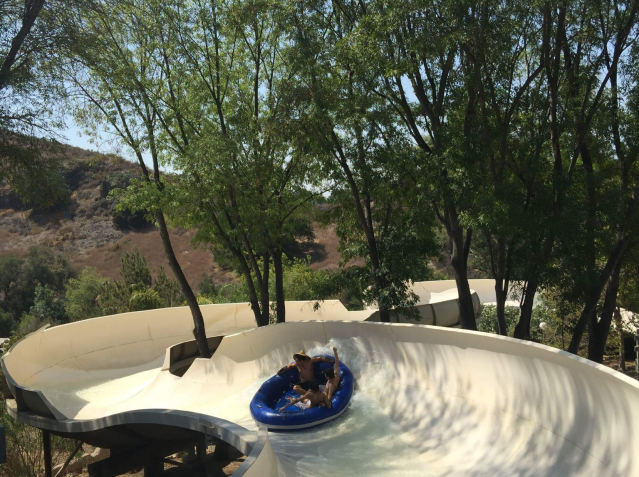 In the above picture, you can see a part of Thunder Rapids and a raft. Each of these rafts had a capacity of holding 2-5 people at a time. My job during that shift was to safely hold the raft in place while I loaded the next group of guests. While the guests sat in the raft, I had to give them the instructions on how to ride. Now, given that it was only one raft at a time, the two lifeguards had to alternate sending one down the slide. I would check the slide and make sure the other lifeguard was cleared from his raft of people. Once the slide was clear, then I would proceed.

The slide is wide at the top for loading the rafts, but it starts to narrow and cave in from the sides making it wide just enough for the rafts to slide down comfortably. Let me include that this is indeed considered a raft only ride. In order to send the raft down with the guests, I needed to pull the raft, take a few steps back until a certain point where I would then stop and twist my body, let the water current push the raft ahead of me and finally release. On this particular day, it didn’t quite work out that way.

I kept walking backwards and when I finally decided to stop, twist and release, it was too late.

The space between the raft and the slide was too narrow for me to even fit through and walk back to my spot. Also, the water had quickly began to overflow during my attempts. My next memory of this distressing situation is, I looked up at the other lifeguard with a horrified look on my face and he looked back at me with the same horrified look as he observed and also realized what was happening. As I faced my impending doom, I extended my arm out and began falling back, all while letting out a dramatic, “noooooo….”

Yup, *thumbs point to myself* this lifeguard fell down the slide without a raft.

Now, let me replay this scenario from a different perspective. Let’s say you are in line for Thunder Rapids during a hot summers day. You and your friends are almost to the top and are excitedly discussing just how gnarly this slide is going to be. Suddenly, you are distracted by loud splashing sounds coming from the two lifeguards who are loading up the rafts. Next, you see one of the lifeguards guiding the raft to go down the slide, when all of a sudden, she extends her arm and shouts “noooo…” before hysterically disappearing down the water slide.

Remember I had loaded the raft with three girls? Well, at first they all gasped as they realized I was coming down the slide along with them. I landed head-first, face down on my elbows and knees and was sliding down right in front of their raft! There was no way I could even try to get inside their raft safely so all I really did at this point was the best solution I could come up with at that time: laugh hysterically. The girls couldn’t help themselves but to laugh too. I remember turning my head at one point and saying to them, “hold on girls!” They couldn’t even open their eyes due to their excessive laughing. I don’t even know what all of this must’ve looked like from their point of view.

We started approaching to the bottom of the slide. The very bottom usually had two lifeguards who operating with receiving the rafts and letting the guests out safely.

As I arrived to the bottom, both lifeguard’s mouths dropped when they saw me sliding down on my own. I landed in the pool, but had to quickly dive to the bottom because the raft with the three girls was approaching behind me at full speed. After the raft floated above me, I jumped out of the water and ran out and up the hill and up the stairs back to the top of the slide.

I arrived out of breath and completely drenched. The other lifeguards on top began to laugh when they saw me and so did some of the people in line who had witnessed the whole ordeal; but the super awesome part was that everyone in line began to cheer and applaud for me.

After taking a few victory bows (because I totally owned that moment), I jumped back into my place and got right back to work.

To be honest, this ride was 10X more fun without a raft. In fact, it was the best water slide experience of my life!

Can’t picture me as a lifeguard? No worries, I don’t exactly give off that “lifeguard” aura so I have it pictured for you!

One reply to “Lifeguard Down”